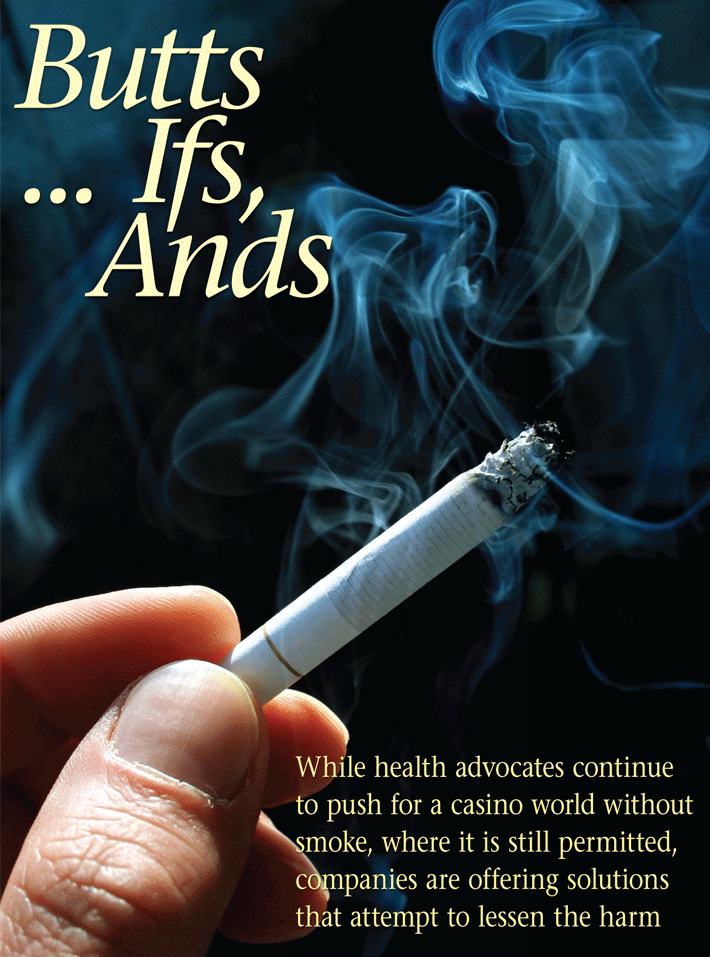 Last month, the National Council of Legislators from Gaming States, the New York-based organization made up of lawmakers from U.S. states with casinos and other forms of regulated gambling, formally adopted a resolution encouraging states to take action to make all gambling workplaces smoke-free. The resolution, which encourages lawmakers to include casinos and other gambling venues in smoke-free workplace laws and recommends that such measures be included in state-tribal gaming compacts as well, is the latest push in some corners of the gaming world to separate casinos and smoking.

“It’s a big deal because it shows that we are moving into an era of health-conscious legislators,” said Stephanie Steinberg, chairwoman of Smoke-Free Gaming, a Colorado outreach organization that has promoted smoke-free casinos since 2005.

Most don’t argue that a casino is a healthier place without than with smoking. But after some years now it’s also difficult to argue that smoking bans haven’t had a direct negative impact on revenues. Monthly gaming revenue is monitored, of course, and in some U.S. states studies have been performed to document the fiscal influences, before and after, of smoking bans.

Illinois, Delaware and Colorado already have smoke-free casinos, while other states are expected to consider strengthening smoke-free laws to include gambling workplaces, initiatives now supported by the NCLGS. Yet, even for the most optimistic, a worldwide gambling industry without smoking is far from reality. In the interim, there are companies offering solutions to lessen the direct impact of smoking in the casino environment and reduce its effects on workers and patrons.

Gauging the direct effect of smoking bans on casino revenue is a little trickier these days because it has to be done within the context of the current economic upheaval, which is causing many in the industry to struggle with revenue declines due to the simple fact that people are spending less money on discretionary activities such as gambling.

Colorado is a good case study. A statewide smoking ban, which exempted casinos, race tracks and bingo halls, was originally passed in 2005. In 2006 the second part of the Colorado Clean Indoor Act was enacted, taking away the exemption for bingo halls. In 2007 the casino exemption was repealed, requiring properties to be completely smoke-free starting Jan 1, 2008.

The 41 casinos in Colorado are limited to the historic mountain towns of Black Hawk, Central City and Cripple Creek, and all three destinations are essentially clear of direct drive-in competition from other jurisdictions that do permit smoking — as seen in many parts of the crowded Northeast, for example.

The timing of the smoking ban also makes Colorado a particularly interesting example. It occurred about the time the economy began to sour. In 2008 gambling revenue in the state was consistently down every month from 10 to 20 percent, according to Lois Rice, executive director of the Colorado Gaming Association, a trade group representing casino operators.

Rice acknowledges the negative impact of the economic crisis, but says there are also examples supporting the notion that the smoking ban has been extra damaging — piling on during a down economy. She points out that two casinos in Cripple Creek met an exemption by the state Legislature that says properties with existing cigar bars could continue to offer smoking as long as they showed at least $50,000 a year in tobacco sales. “Cripple Creek revenues were not down anywhere as significantly as Central City and Black Hawk because two of those casinos, which are two of the more popular properties in Cripple Creek, were allowing smoking,” she said. “We were able to sort out what was smoking and what was just the general economy. We’re pretty sure that the revenue [loss] is mostly attributable to the smoking ban.”

Illinois went smoke-free at the start of last year. In the first month of the ban, adjusted gross receipts at the state’s casinos dropped 17.5 percent compared with January 2007, according to statistics from the Illinois Gaming Board. As of November 2008 casino revenue was down 20.3 percent for the year.

In other parts of the United States studies have been performed, prior to the current economic downturn, to measure the impact of smoking bans on gaming numbers. In Delaware a 2005 study called “No Smoking at the Slot Machines: The Effect of a Smoke-Free Law on Delaware Gaming Revenues” concluded that “the evidence clearly indicates that the
Delaware Smoke Free Air Act resulted in statistically significant revenue
losses at each of the three Delaware racinos.”

Perhaps there has been no higher profile, or confusing, ban on smoking than the one that was enacted, then repealed, in Atlantic City. A ban that restricted smokers in Atlantic City casinos to specially built lounges went
into effect on Oct. 15, 2008. Then, in the face of a worsening economy and increased competition from bordering states, casinos argued that the timing of the ban couldn’t have been worse. So City Council voted to lift
it on November 16 for at least one year and reverted back to the original restriction, which limits smoking to no more than 25 percent of a casino floor. According to the New Jersey Casino Control Commission, during a certain seven-day period while the ban was in force, the amount casinos won fell 19.5 percent. For all of November, A.C.’s 11 casinos reported $345.5 million in revenue, down 7.8 percent from the same month a year ago. Nine casinos reported revenue declines in November, the worse of which was a 30.1 percent dip at the Atlantic City Hilton.

“One of the things that the anti-smoking lobby is trying to convince legislators is that the population of non-smoking gamblers will replace the smoking gamblers, and that’s not been the case at all in Colorado,” said Rice. “Our state Legislature attached a fiscal note stating that because of limited options for gaming in Colorado they predicted that there would be absolutely no fiscal impact. I think that any state that is looking at a potential ban needs to make sure that the legislature is educated as far as what the real facts are as far as loss of revenue.”

Oregon is the newest state to implement a smoking ban. It went into effect on January 1 and prohibits smoking in essentially every bar, tavern and restaurant across the state, which are the locations of the Oregon Lottery’s video betting terminals.

Casinos in Colorado have tried to offset the revenue decreases by creating dedicated smoking areas. In November voters approved a referendum to increase the state’s $5 bet limit to $100, extend casino operating hours and add roulette and craps to the game mix. “We hope that with those additional increases in stakes and hours we can
mitigate some of the affects of the smoking ban,” Rice said. According to a 2006 study titled “The Percentage of Gamblers Who Smoke” produced by the University of Nevada, Reno, one of every five casino patrons in Nevada is a smoker. The study found that the percentages of gamblers in the state’s three tourist centers of Las Vegas (21.5 percent), Reno/Sparks (22.6 percent) and Lake Tahoe (17 percent) were very similar to the overall percentage of the U.S. population that smokes, which stood at 20.9 percent, according to 2005 data cited in the study.

In a bit of counter-intuition, and perhaps a glimpse into the future, the Fernley Nugget, about an hour from Reno, opened in December as the first smoke-free facility in Nevada built from the ground up.

Scott Tate, general manager at the property, hopes the move pays off with customer and employee loyalty. “The Fernley Nugget has been well-received by the community,” he said. “Our guests and employees appear to really enjoy and appreciate the facility. There appears to be a real sense of loyalty to the facility given its smoke-free environment. The financial performance has met our reasonable expectations.”

Casino Air of Bellevue, Washington produces a technology that goes inside a facility’s air conditioning system to turn roof-top air-conditioning units into “big smokeeaters”. Casino Air uses the HVAC system to mix and distribute ozone. A sophisticated sensing system ensures there is enough ozone to eliminate odor but not enough where the ozone itself is above the federal safety standard of 50 parts per billion.

Casino Air has installed its systems at some 20 gambling venues for the Chickasaw Nation in Oklahoma, and the majority of the company’s business is with tribal properties that aren’t subject to smoking bans.

Danish firm SmokeSolution debuted its Smoke Cabins at the International Gaming Expo last month in London. Set away from the gaming table but still indoors on the casino floor, the “cabins” take in smoke via a fan system, clean it through three filters and redistribute 99.95 percent clean air internally or externally as required, according to
the company’s marketing material.

The A100GT can be retrofitted into most standard gaming tables, where a diffuser or blower – 2.5 inches wide and 25 inches long – gets embedded behind the chip tray on the dealer side and blows a wall of 95- percent purified air between the dealer and the players sitting at the table. The purifier itself, a small box usually mounted under the table, is connected by a tube to the diffuser. The diffuser blows air, at a 50-degree angle, away from the dealer and almost straight up so it doesn’t blow the smoke back into the patrons, creating a sort of purified air curtain around the dealer.

Airistar’s Marketing Director Allison Burke says while there are very advanced HVAC systems in many of today’s larger casino environments, what Airistar offers, while in no way a claim that its products 100 percent protect casino dealers from second-hand smoke, is a localized solution that reduces the smoke exposure to the dealer and creates purified air within the area.

“At the end of the day, [the HVAC systems] are not right there at the spot when the dealers are getting the smoke blown in their face, so what we offer is a companion product, a work-station solution, to these high-end systems,” she said.

Mainly at blackjack tables, although the A100GT system can be fitted into almost any gaming table with a little altering to the table’s surface, the company has found the most success to date placing its product at Indian casinos in the Midwestern U.S.

“We have had numerous people that we talk to really appreciate something that protects them from the patrons’ smoking,” said Roy Kibbe, Airistar’s President.